What to do and see in St. George, United States: The Best Places and Tips

St. George is central to some of the most dramatic natural beauty in the American West, from the Mojave Desert to Zion National Park and the Pine Valley Mountains. While its summers are hot, St. George's mild and largely snow-free winters make it popular with golfers, hikers and bikers. In fact, Brigham Young wintered here – his home in town is open to the public.
Restaurants in St. George 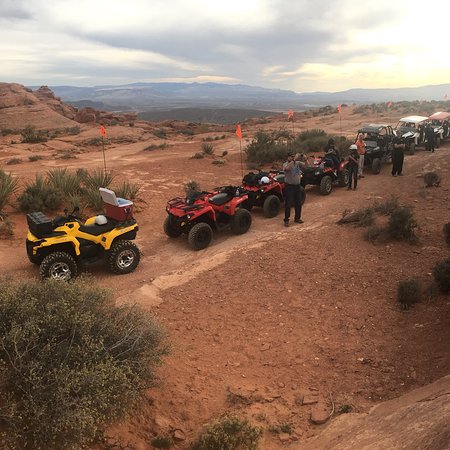 Gateway to ZION National Park recently voted # 1 National Park in the USA! WE are the MOST experienced and the FIRST company of our kind in Southern Utah. WE have been serving our guests for 22 years now and loving every minute of it. Open year round! WE offer ATV, UTV, Jeep and Scenic Van Tours, all can be customized for your personal adventures.

Great company that emphasizes safety & personalized rider attention. We had a UTV & 2-up for 5 of us. This was my wife’s first time driving any off-road vehicle & became confident on the ATV very quickly. We weren’t ready for the trip to end. Thank you. If you love slot canyons, great photo ops, water, and fun you might like this place! Camping is available. Day use too! I live 10 miles from here and always bring out of town guests. They are always amazed. 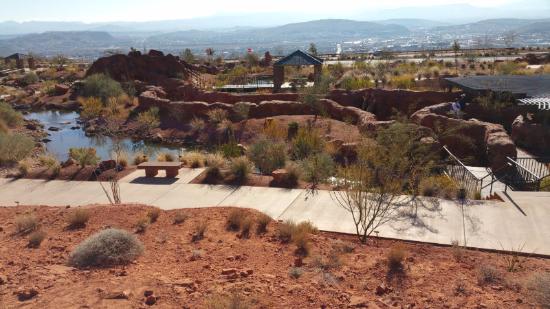 Filled with creative desert landscape ideas, each plant is clearly identified and labeled for note taking. Handicap accessible pathways meander through beautifully planted gardens areas. Restrooms available. During the late fall and winter holidays the extensive gardens were a wonderland of lights. No matter the season, this is a stop worthy of your time. The St. George Children’s Museum is a non-profit organization providing vibrant, engaging and interactive rooms that invites children and families to discover, imagine and create.

We stopped in here just to check it out and spend an hour, we ended up spending 2 1/2 hours. We had kids from ages 10 - 16. They all had fun. There are so many darling rooms and activities. It was a suggested donation...MoreWe're so glad you had such fun experience with us and hope you'll visit us again! 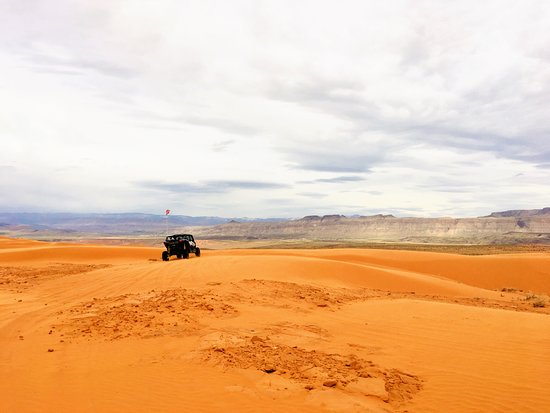 Depending on your option selected, hop in the driver's seat or passenger's seat for an exciting ride! These UTVs are 4-wheel off-roading vehicles that are similar to ATVs,while sitting side-by-side with your friends and family in bucket seats. Each UTV can fit four adults, or drive your own 4 wheeler ATV and experience the ride for yourself. Ride in Sand dunes and the desert with 360° views. Y

We rented two ATVs and had a guide for our 3 hour tour--for my parents' 80th birthdays! They sat in back and held on and the rest of us took turns drivings! There were 6 of us (family, all adult aged). It was a blast! It was a rainy/snowy day and that made it all the more fun! The machines were in excellent, clean condition (they were very muddy upon our return!), the directions Randall and our guide gave us about how to drive were spot on. None of us had ever done this before! We really had the time of our lives! Highly recommend! 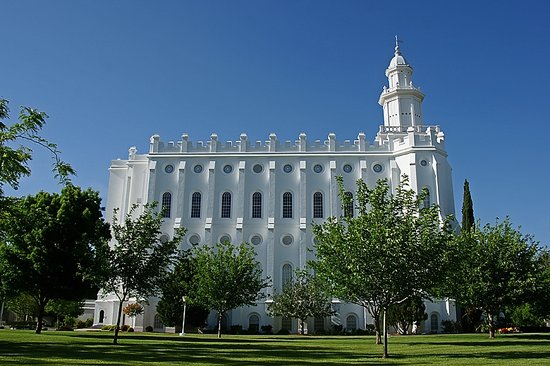 We’ve been to temple a few times, just to soak in the beauty of the architecture and grounds. We’ve also been there in the evening to see the temple lit up inside and out. An incredible sight. 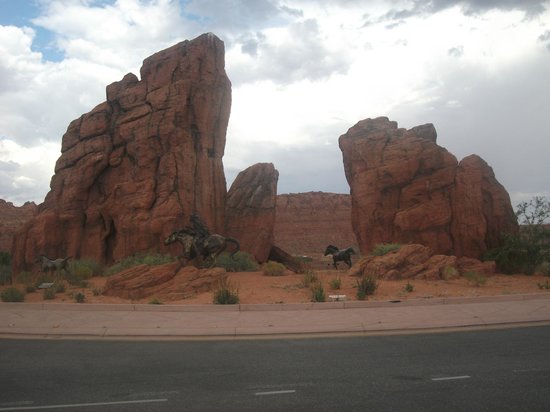 Easily accessible for walking and some light climbing, this red rock area provides a stunning overlook of St. George and the surrounding areas. You must be able to climb a ten-foot sandstone embankment to access the overlook. You'll want to keep a hand on small children since there are no guard rails. The view is worth it. There are many meandering trails to explore, alcoves to climb into, an other red sandstone features, including a cave and natural amphitheater. Parking is limited. Go early in the day during June, July, August, and early September to avoid high summertime temperatures. 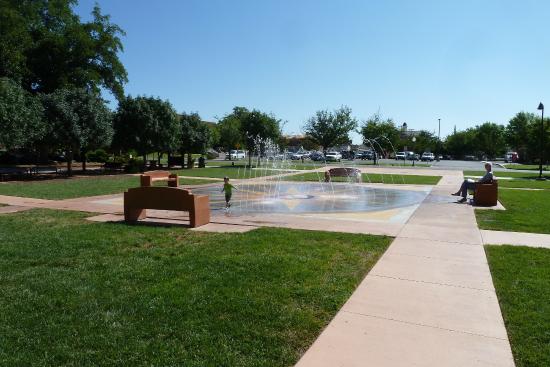 A friend and I drove to go hiking in Zion, and prior to the hike, and afterwards, stayed in St. George, Utah. The pricing, hotel availability and amenities were more available to select from in St. George, Utah than at Zion's park entry. It was a great choice. After a day of strenuous hiking, we chose to spend a day recuperating a bit, and experiencing the history of St. George, Utah's Historical District.

I'm not sure if I was more intrigued with the Old Fashioned candy shop, the massive bag of original old fashioned candy we bought there, the ice cream flavors, the adorable pumpkins everywhere decorating fountains, historical store shop fronts, walkways, or the actual historical buildings themselves? We did get close, very close .... arm's and nose-close examination length distance looking at the building construction types, the columns, the tiny brick pieces shoring up the columns of the decks, the paved areas looking for tag marks the age old surveyors may have made, stared at the mesquite-bush-oiled (creosote?) roof wood planks cut to little pieces, took good close looks at the antiques on display, and marveled at the many stages and ages of structuring that went into the area.

One school building had a plaque that mentioned year built 1901, and just down a short red-bricked walkway was a covered outdoor rotunda surrounded by commemorative brick's from the nearby school's class presidents starting in 1926. Well, I suppose if you weren't from Nevada/Utah area, those names probably would have been overlooked; but I recognized longstanding names in our Las Vegas area that have made great community contributions: Snow, Cox. And, those were just the names I recognized; which made me wonder just who the other families were, too. The Snow family are very involved in Las Vegas, still, and I thought it wonderful to see where the beginnings were perhaps in the western states. The Cox name, I recognized from our internet provider in Las Vegas- Cox communications. From the standpoint of community involvement, and well organized growth, I thought it was pretty forward thinking of a community to so quickly recognize the history and commemorate it in the bricks of the park entry. Simple beginnings with well thought out planning, were cornerstones of communities far and wide; well beyond the simple bricks lining that walkway.

The Historical District corner building is now a Children's Museum. There were numerous Bronze art pieces on display near the street, and stretching back along the green grassy areas of the park. The stained glass pieces were beautiful, too. We started at the road intersection area and walked back through the Children's Museum walkway (the museum itself was closed that day), and through the park to read and experience everything. At the road corner was a large plaque describing the Founder of St. George - Erastus Fairbanks Snow. Then on along the walkway was a small Japanese garden area commemorating 21 cultural exchange students from Japan.

It was a tough decision to select which bronze art statue was my favorite along the walk. The Imagination Dragon sitting on top of a pile of books was an immediate first choice, but each one as we progressed through the park was entertaining in and of itself - the puppies kisses, children playing. The park was designed with a walk through water stream /waterfall feature that I thought was cool, a novel fun design. On to the Carousel, to watch people smiling and enjoying themselves; and on to get a close look of the metal composite art piece in the middle of the park.
I thought the main art piece described to a degree the very formation of St. George, made of nuts and bolts, tools - many of one type of tool in one place signifying many hands to make it, and then multiple tool types in another signifying the many types of hands and labor it took once the base was created. Then, right in the center of the piece, were golf clubs. Yes, one big one, and then many towards the center; and at the base of the piece you would find a children's toy - a bicycle seat, a remnant of music speaker, the elements of play as a center and base of all. On the sides of the piece were lots and lots of license plates, old and newer, signifying the government that managed the boundaries of all too. To see the whole view, you had to step back, way back to see the overall art form was that of music. Music is part talent, part work, part practice. It's joyful and meaningful, can be fun, entertaining, can deliver a message, and it can be harmonized in unity and shared.

Then we drove off while enjoying the bag of candy we'd stocked up on in the historical district, to our next point of interest - Snow Canyon.

As a side note, Fascinating, too- in some states, that holiday we visited was considered Columbus Day, but in Utah, since 2012, it is designated as Native American Day. Social responsibility and consideration were evident everywhere, throughout the town square areas, and the whole town itself. As a history buff, I enjoyed the hour we spent here. The tour guides were relatively knowledgeable for volunteers and the preservation work was well done. I did see an interesting water-filled warming plate, which I have never seen in any historic home anywhere. The kids weren't too interested, but they liked playing on the grounds. Free and worth the time spent. 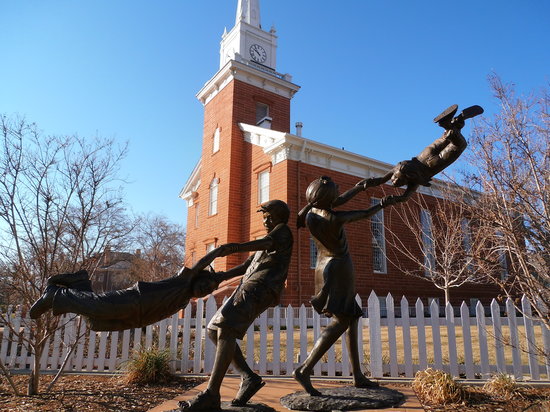 Under renovation. Touted as having an open-to-the-public tabernacle choir practice every day. NOT TRUE. The practice actually occurs up in Salt Lake City. Before renovation began at the tabernacle here in St George, retired choir members from SLC used to practice and you could go listen. Renovation has been going on for over a year. Nothing to see or hear here....