What to do and see in Samarkand, Uzbekistan: The Best Places and Tips

Samarkand (Uzbek Latin: Samarqand; Uzbek Cyrillic and Tajik: Самарқанд; Persian: سمرقند‎; Russian: Самарканд; Greek: Σαμαρκάνδη), alternatively Samarqand, is a city in modern-day Uzbekistan and is one of the oldest continuously inhabited cities in Central Asia. There is evidence of human activity in the area of the city from the late Paleolithic era, though there is no direct evidence of when exactly Samarkand was founded; some theories propose that it was founded between the 8th and 7th centuries BC. Prospering from its location on the Silk Road between China and the Mediterranean, at times Samarkand was one of the greatest cities of Central Asia.
Restaurants in Samarkand 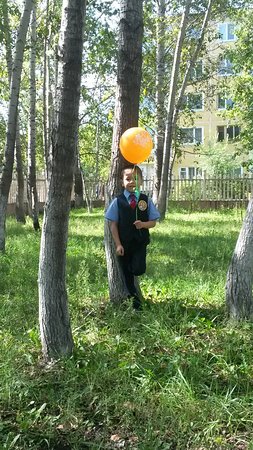 This street has tombs belonging to Timur and his family and favorites that are decorated with the city's finest majolica tilework. 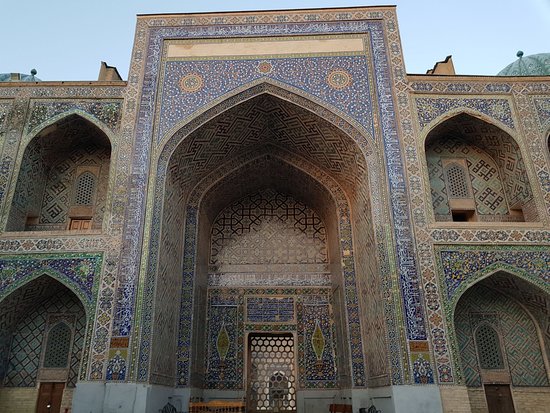 The centerpiece of the city is one of the most important monuments of Islamic arts.

Now a Unesco Heritage site and no wonder - there is a magnificent collection of buildings, the Register and some madrases each of which is beautifully decorated with interesting architecture. The main portal of Ulugbek and the minarets are good photo opportunities.
See it during the day for the interesting decorations but return in the evening to see it lit up. 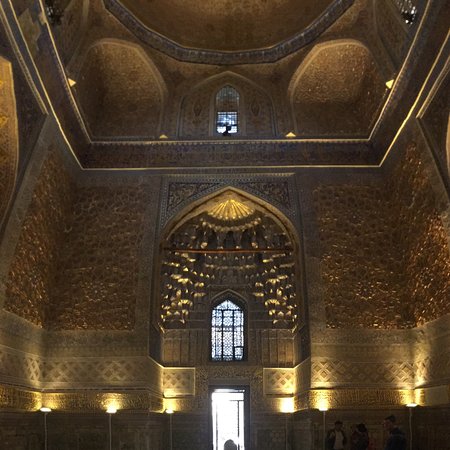 While not as extensive or as eye-popping as the Shah-i-Zinda Mausoleum complex, this is of more political importance as it is the burial place of Timur or Tamerlane and several of his sons and grandsons. His tomb is marked by a dark green jade stone, the largest piece jade in existence. The inner mausoleum is gilded with 6.5 pounds of gold and has a very different golden look that is very impressive. 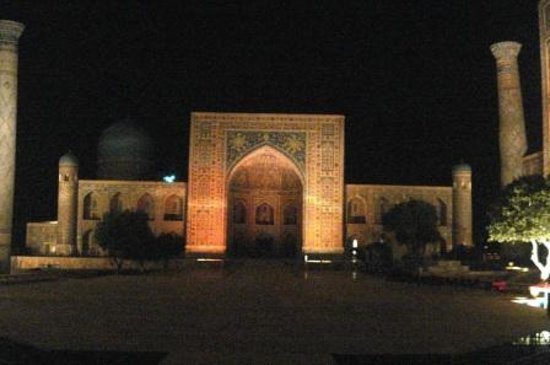 One of the 3 Moslem clergy academies that surround Registan square.

The whole Registan square is full of outstanding monuments. Whilst this madrassa is no longer operational, the guide explained to us all the different rooms and the procedure in the old days when talented youngsters were taken under strict supervision for teaching during week days. The building is really worth seeing. 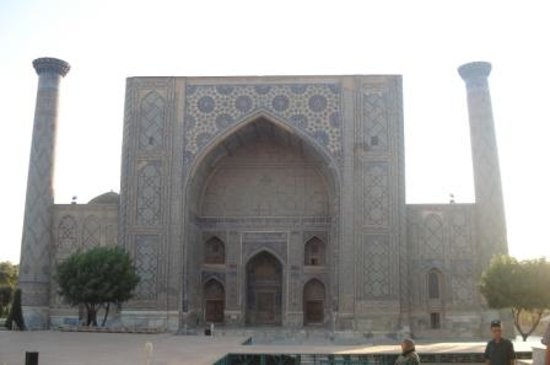 In the present Registan square in the XV century on the behest of Mirzo Ulugbek bin Shahrukh there were built several buildings: khamam, mosques, caravanserai, khanaka and majestic and incomparable building of Palace of Sciences - madrasah. Unlike his famous grandfather - "the ruler of the seven constellations of Tamerlane Shahrukh", Mirzo Ulugbek did not seek to build the highest building...

Come to see this feast for the eyes while touring Registan. Explore its courtyard and lookout for a ceramics shop selling pointillist-like adorned ceramics. These are gorgeous and highly unique. 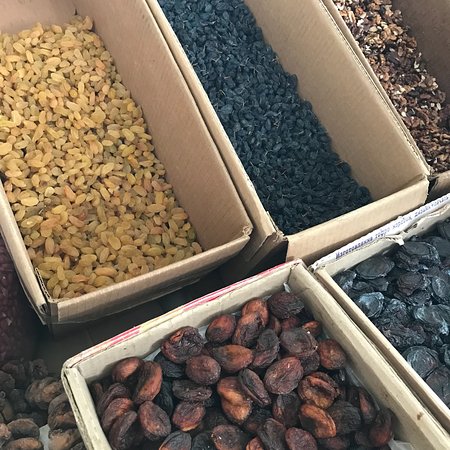 If you do nothing else in Uzbekistan, go into the bazaars to look at the vegetables, spices and meats. A great mixture of local people bring and buy beautiful produce, and you can stop and eat food from the little cafés. Central bazaar is just off the tourist area and easy to get to. Not as big as Chorsu in Tashkent it still makes a worthwhile visit. Try to go earlier in the day, but it will still be going around midday.

One of the 3 Muslim clergy academies surrounding the Registan.

It is a given in Islamic architecture that human /animal forms are NEVER portrayed, so it must have been a complete shock and outrage when the decoration of this madrasah was finally finished, because it portrays, in bold and stunning tile-work, two figures of tigers either side of the huge doorway (hence the Sher in the madraseh's title) alongside the more usual geometric patterns and Kufic tile-work script. The effect is quite stunning, and shows the much more liberal attitude to religion and morals taken by the inhabitants of this part of the Islamic world - and so much the better they are for it by breaking free from convention, Inside the madraseh are some interesting artisan workshops where the craftsmen (and women) practice their art. Not to be missed are Barbur, the musical instrument maker and player (you can buy CDs of him playing authentic Uzbek instruments from the 7th century onwards) and the tile-maker whose family has been assisting in the reconstruction of the tile-work of the various mosques and madresehs to bring them back to their former glory. Not to be missed!... 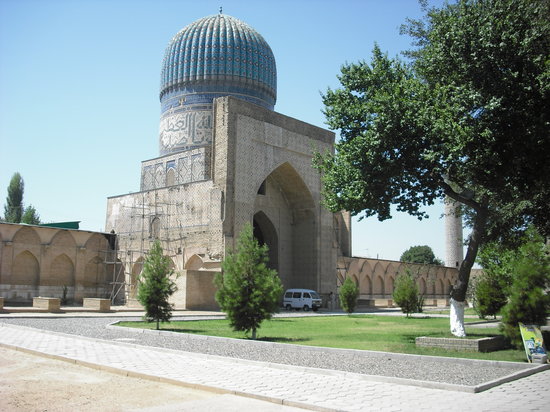 Built between 1399 and 1404, this was one of the Islamic world's biggest mosques which crumbled for centuries before collapsing in an 1897 earthquake.

Within 15 mins walk of Registan Square, perhaps without the immediate wow factor but impressive all the same. Central courtyard is shady on a hot day. Much is reconstructed with further work ongoing. 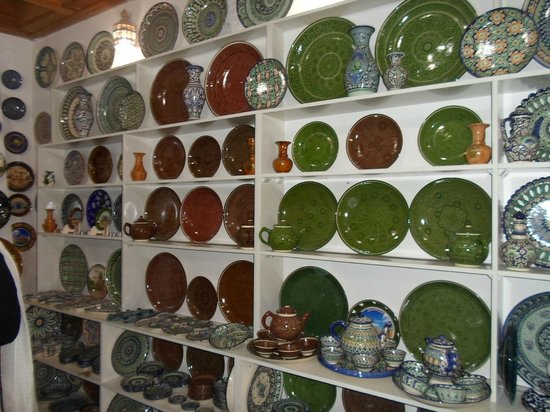 If you are Samakand you will not miss this buildings to see or visit.The three buildings are majestic and big.These madarasas are turned into tourist souvenir shops. 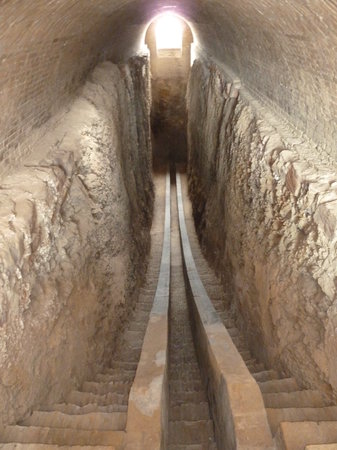 A small museum of astronomy stands on the remains of the Observatory of Ulugh-Beg, Timurid ruler and astronomer.

The history might be amazing, but there’s not much to see here. I came here on a day tour of the Afrosiab neighborhood. I think I was fighting to stretch out the visit to 30 minutes. Most of the Observatory is destroyed.