Top 10 Things to do in Hokkaido, Japan

Hokkaido (北海道, Hokkaidō, literally "Northern Sea Circuit") (Japanese: [hokkaꜜidoː] ( listen)), formerly known as Ezo, Yezo, Yeso, or Yesso, is the second largest island of Japan, and the largest and northernmost prefecture. The Tsugaru Strait separates Hokkaido from Honshu. The two islands are connected by the undersea railway Seikan Tunnel. The largest city on Hokkaido is its capital, Sapporo, which is also its only ordinance-designated city. About 43 km north of Hokkaido lies Sakhalin Island, Russia, whereas to its east and north-east are the disputed Kuril Islands. 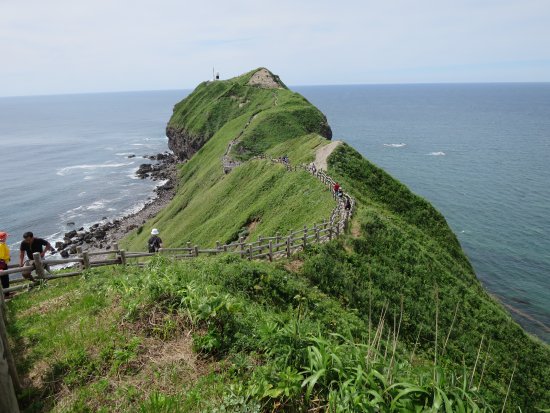 We visited in a small rainy day, it was super windy but I am still excited of the natural beauty. This was one of our Mission to be completed in Hokkaido, other than the super fresh sea urchin :P
Public toilet next to car-park was so clean, a short walking distance to the Kamuimisaki, the signature door starting point. Along the half way, there was a wood bench in each view deck of both side. After return to Kamuimisaki, remember walk to the view deck which able to view the whole Cape Kamui was so beautiful!
We drive from Otaru, Shimamui Coast was our 1st station, after Cape Kamui we head to Niseko to stay a night for rest. Of course, not forget to eat super fresh urchin rice bowl before we leave Shakotan peninsula.
Well worth the drive, one of our highlight in our 3 weeks holiday in Hokkaido. Highly recommended & definitely will come again when we travel to Hokkaido.
Thanks for the vote if you found this helpful :D 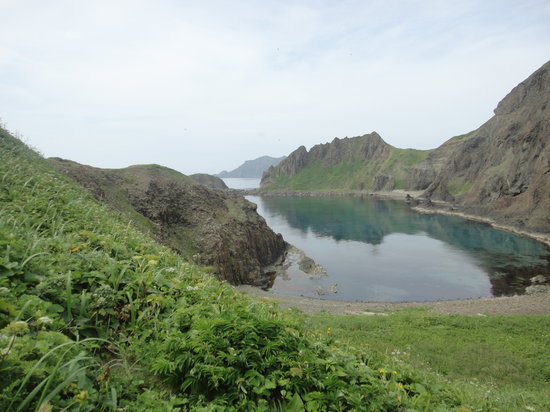 For three months a year this is a beautiful accessible island. Over 300 varieties of wild flowers. The island is a ferry ride from wakkinai. The locals harvest sea urchines and farm kelp. There is wonderful hiking and a ferry to rishiri takes you to the little fuji mountain for a spectacular climb. 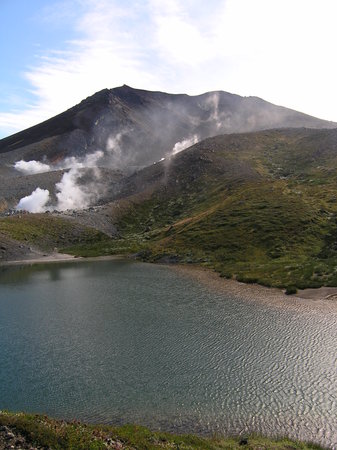 We visited on 23 May, stay overnight at Asahikawa. 1st station we drive to Asahidake Gensui 大雪旭岳源水 to collect mountain water then reach ropeway station up to Daisetsuzan to completed one of our Mission in Hokkaido.
Up to the Sugatami Station, there was self-service corner to rent snow boot 300¥ in many sizes, drop money into a box & pick your shoes. Choose slightly bigger than normal size to have a higher cover to avoid the snow go into your feet.
During our visit on mid-May, we got to walk on thick snow, 1st time in our life to walk so hard all the way to the sulfurous vents. There was some rest chair & table in observation deck, we are not able to eat the foods that we brought up due to the windy day!
For safety reason, we only play snow around Sugatami Station, was a special experience for my little boy as he was the 1st time to see & play the real snow for the pass 4 years traveling.
Definitely we wish to come back again in summer for alpine, but not to come again for snow on May as nothing much to do! But visited Hokkaido on May for us was win-win, we were able to see shibazakura & tulip blooming, up to the Daisetsuzan still able to see snow ;D
Thanks for the vote if you found this helpful :D 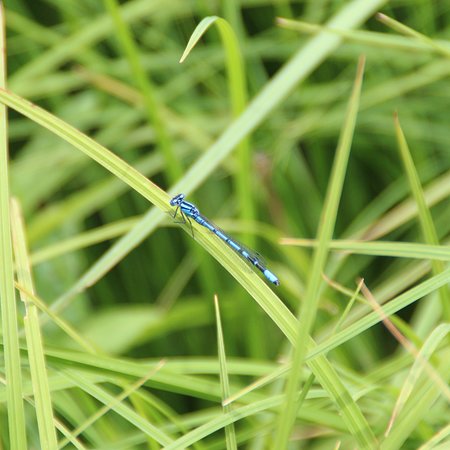 Perfect weather on a fine autumn afternoon, made for a most memorable tour. We did the longer 1 1/2 hour walk over 3 km; through Forests , and beautiful vistas of Mountains with perfect reflections on the pristine waters.
We had our bells clanging, to warn off unwanted encounters with bears. Saw the sun setting at about 4:30pm.
Enchanting captivating scenery thanks to the fine weather. Cannot recommend highly enough Came here to see the flower fields . Amission is Y410 adults , child less than 15 yrs ,Y80. Below 5 free. Seniors Y210. . Parking Y410.
We parked at the Higashi gucci gate mapcode 708569530.
Very walkable even for elderly except to get to the ticket office from the car park is a flight of 35 steps up.
The flower fields were not in full bloom yet but would imagine it to lovely in the right season.
Expect to spend half a day exploring the various parts of the park. 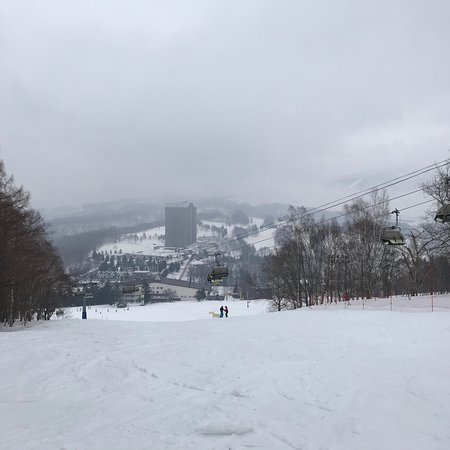 Rusutsu has something for everyone. Excellent groomers on both Mountains for beginners and intermediates, the quirky shopping arcade in the resort hotel, some good local eating options, and the tree skiing is sensational when it is on. Mt Isola has lots of different glades and gullies that collect and sift the powder, but take care...it can be easy to go too low in certain gullies and it is a long walk out. Steamboat restaurant or the restaurant at the base of either gondola are good lunch spots 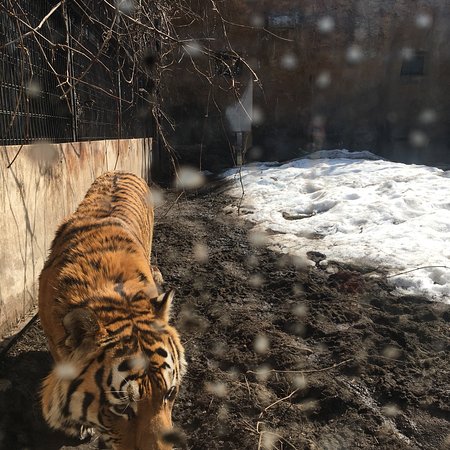 What a marvellous parade of penguins! It's everything as advertised. Mind you, these are independent-minded magnificent critters. So if they don't feel like exercising, you don't have the full force marching in step !
We felt a little sorry for the polar bear who was pacing up and down but hey, what can you do with limited space in a zoo. Certainly Asahiyama does it better than our Singapore Mandai Zoo ... 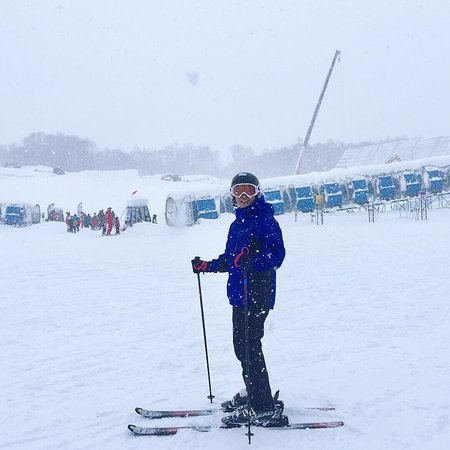 Hanazono Niseko is located in the southwest corner of Japan’s northernmost island of Hokkaido, 850km north of Japan's capital city Tokyo. Niseko Hanazono Resort lies 1000 metres below the spectacular peak of Mount Niseko-Annupuri, offering you one vertical kilometer of stunning powder snow in the winter, and an unprecedented variety of activities during the rest of the year including golfing, Water Sports, MTB, eco-trekking and more.

If you are in Niseko Hirafu, try to get over to Hanazono. It's the best. Less crowded than Hirafu, with great runs from green to double black. Don't be put off only " one lift", three in a row. Traverse across after the swinging Monkey lift. Must have an All Mountain lft pass. Less options for lunch but the main lunch spot is great with 4ltr beer towers. 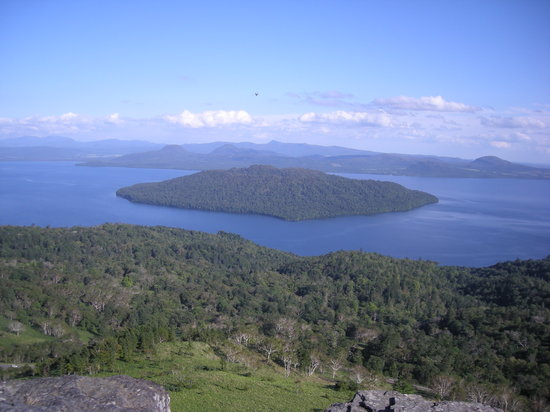 It's on Highway 243 between Bihoro and Teshikaga. I visited the place by taking Twinkle Bus tour (organised by JR Hokkaido).

Bihorotoge Lookout is a Roadstation one will pass by when driving from Lake Kussharo to Bihoro town along Highway 243. There is a roadstation stop here. One must make a point to climb up a little slope across the roadstation to catch a most picturesque view of Lake Kussharo and the surrounding. We passed by in the late afternoon and caught a beautiful sunset. Highly recommended.

It's a very well known beautiful pond just outside the border of the Shiretoko National Park, and according to my friend the water comes from nearby Lake Mashu. The water's colored aquamarine and Emerald green and very still and mysterious to behold, they said it is about 5feet deep. Need to have a car to come here or maybe reserve a bus tour.