Roussillon (/ˈruːsɪjɒn/ or /ˌruːsiːˈjoʊn/; French: [ʁu.si.jɔ̃]; Catalan: Rosselló [rusəˈʎo], Occitan: Rosselhon) is one of the historical counties of the former Principality of Catalonia, corresponding roughly to the present-day southern French département of Pyrénées-Orientales (Eastern Pyrenees). It may also refer to Northern Catalonia or French Catalonia, the first used by Catalan-speakers and the second used by French-speakers. A 1998 survey found that 34% of respondents stated they speak Catalan, and a further 21% understand it.
Things to do in Roussillon 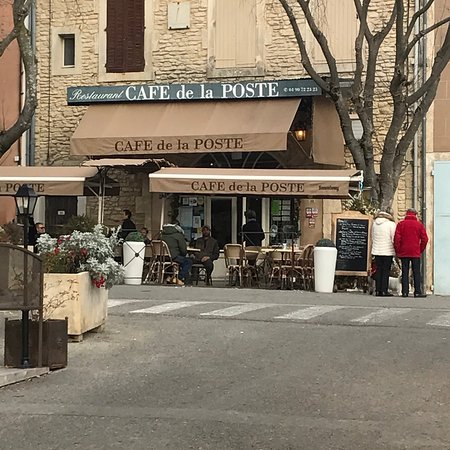 We happened upon this beautiful cafe, on a sunny September afternoon, in need of some refreshment. We were serve fairly quickly despite them having a full sitting outside...and although we were only having drinks, the Asian/French waiter was jovial and had time to crack a joke or two. We loved soaking up the ambiance of this wonderfully positioned cafe... 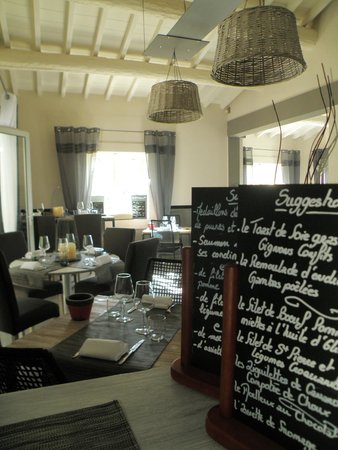 We were lodged in one of the Roussillon hotels and walked our way down to this restaurant. Stylish and very well equipped. Excellent food and service. Would go there again! 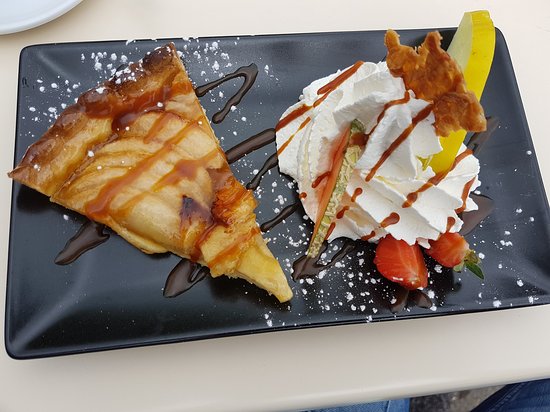 Its the view! A place to sit and watch the world go by whilst looking out towards the attractive perched village of Roussillon and to the magnificent ochre cliff.
Food was perfectly OK. We had a salad and a pizza followed by an extraordinary Ice-cream which attracted astonishment from other tables followed by requests for photographs. Kids of all ages will love it.
Service was efficient and friendly but this was the beginning of April. 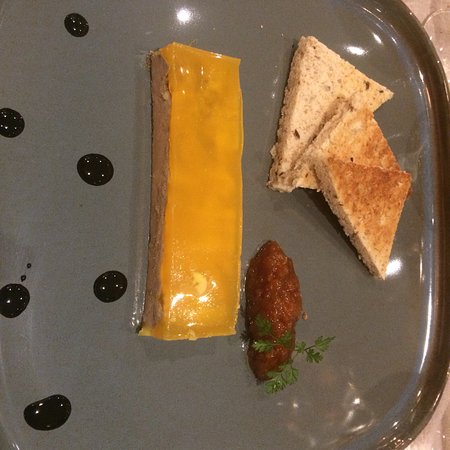 Our group of 8 including two children were returning from a Monday morning visit to Abbaye de Senanque, and stopped at this very pleasant village. We had been advised to visit the Cafe de la Poste for lunch, but we learned on arrival that it was closed Mondays. Le Carillon was right around the corner and the posted menu looked inviting. We were not disappointed. The pasta dishes were tasty and al dente. Nicely accompanied by a house wine, or a biere pression. The service was excellent, and the Terrace with awning was attractive, but we opted to sit just inside the restaurant. In view of that great lunch (menu 2 plats + cafe for 21 euros) we will definitely return when in Goult !! 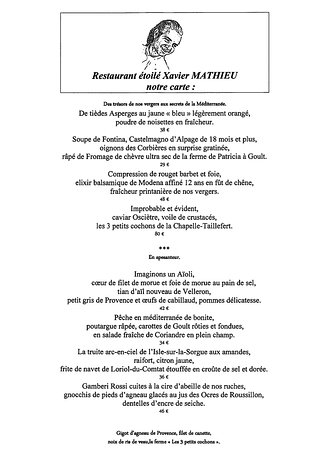 Chef Xavier MATHIEU guided by his inspiration amazed by his inventiveness and his perpetual search for new tastes, while keeping the spirit and DNA of<br>Provence.<br>He defines his kitchen as follows: “My kitchen is truth, purity and emotion are three words that characterize it.”<br>The Chef, "Maitre Cuisinier de France" starred in the Michelin guide,<br>draws inspiration from the Mediterranean cuisine that he interprets<br>over the seasons and proposes dishes inspired by his origins.<br>The sommeliers advise customers with know-how in their choice on a<br>wine list with no fewer than 400 references.

Basically all the dishes were excellent, except the main course (wrong balance vegetables / cochon) The Deserts were totally tasteless... They should hire a real pastry chef. ++ Croissants and breads are so delicious, don't miss the breakfast. 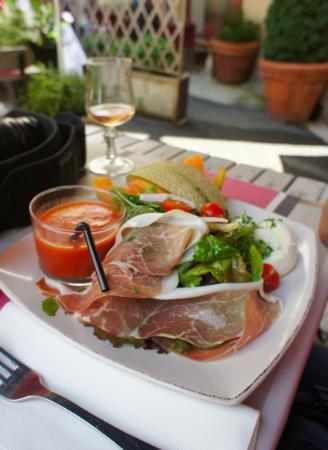 Reviewed By Anna A

Excellent (quality and preparation) food worth the price in a touristy and charming Gordes. Lovely poultry (guineafowl) and lamb and fabulous desserts!!! The only thing was a starter which was a lobster and I naively thought it would be the entire or at least half of a lobster but it was three little pieces of a lobster with vegetables. The quantity of this starter was quite disappointing, nevertheless it was tasty. The wine , we had a glass of white from the area was fabulous. The service was "impeccable" and with a nice smile.
It was a beautiful experience and I was ready to forgive the minimalistic lobster salad :) 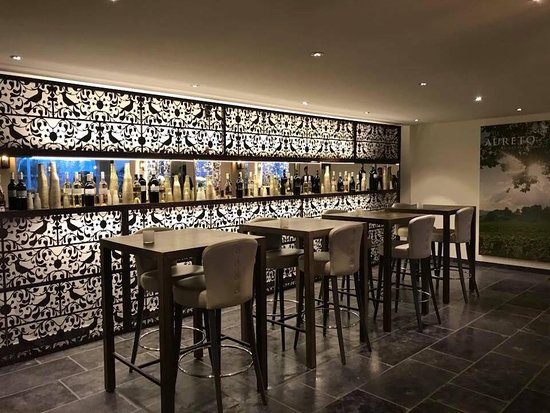 The food here was simply stunning all around - presentation, smell and taste. We picked the 7-course tasting menu for our dinner and, as it happened, we picked the opposite dish from each other for each course. Despite the mighty 18 dishes between ourselves, we pretty much cleaned our plates ... Top marks to the chef and his team who are clearly hugely talented and passionate about their cooking. Each dish was a piece of art on the plate - a feast to the eyes, the nose and the taste buds (whoever made that amazing avocado dessert and that classic dish pear and chestnut should be awarded with a medal - they were truly a labour of love!). It should definitely be rewarded with a star on the Michelin's list. 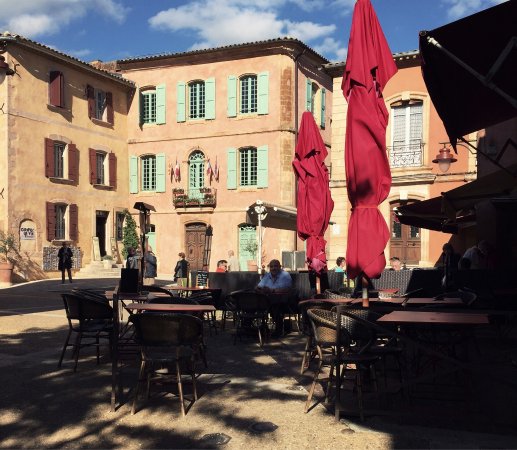 it&apos;s a Creperie and bar. À break for lunch, we serve salty pancakes and salads. A desire to break the afternoon, you will find in this sweet crepes, ice cream restaurant.

We make a quick stop in this pretty restaurant in the main square of Roussillion. Speedy service and nice prices. Good crepes, salad nothing special. 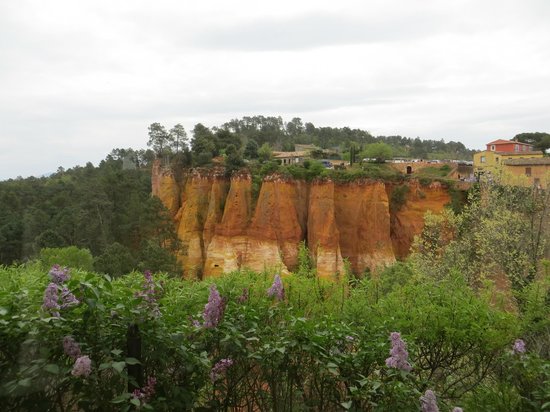 Panoramic views over the ochres of Roussillon.A total change of scene… and one you&apos;ll love. Sample the flavours of Provence, and enjoy a range of culinary wonders which Jean Luc Laborie will be delighted to share with you.Come to the Restaurant David with its panoramic views and Terrace overlooking the ochre cliffs or take shade in summer under the beautiful pergola with its hundred year-old wisteria.Let our chef Emmanuel Champion delight you with his seasonal gourmet cuisine. A range of set menus, such as the "Return from the Market", draw on local flavours. Meanwhile, the winter fireplace menu boasts various roasted specialities including suckling pig, leg of lamb, rib of beef or rabbit.The Restaurant David is the perfect venue for your family dinners, weddings and any other special occasions…

We enjoyed a light lunch at David during our visit to Roussillon. Located in a local hotel, the staff is nice and easily accommodated us on the outside deck. We had a wonderful Caprese Salad with Buffalo Mozzarella and a neat melon salad with a cantaloupe shell filled with bulgar, feta, mint and cantaloupe. A surprisingly good mixture. Stop on by Restaurant David, it takes you away from the hustle of the tourist crowd. 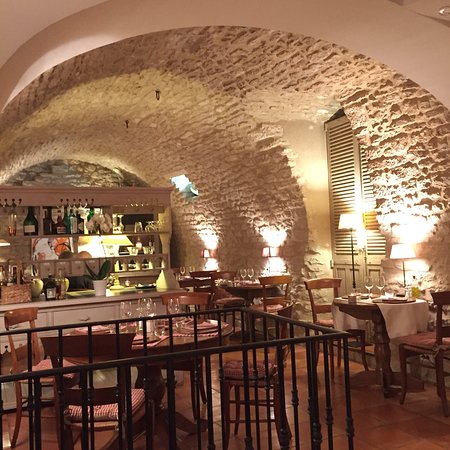 Best and most memorable meal on our holiday in Provence...so delicious and well presented with great service