The 10 Best Things to Do in Winchester, United Kingdom (UK)

Winchester is a city and the county town of Hampshire, England. The city lies at the heart of the wider City of Winchester, a local government district, and is located at the western end of the South Downs National Park, along the course of the River Itchen. It is situated 61 miles (98 km) south-west of London and 13.6 miles (21.9 km) from Southampton, its closest city. At the time of the 2011 Census, Winchester had a population of 45,184. The wider City of Winchester district which includes towns such as Alresford and Bishop's Waltham has a population of 116,800.
Restaurants in Winchester 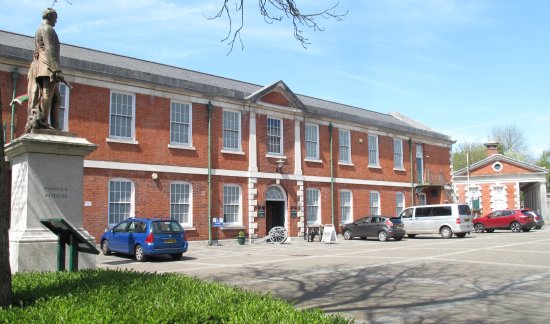 One of Winchester's five superb Military Museums telling the story of 250 years of campaigning for peace by The Royal Green Jackets and their former regiments, the 43rd and 52nd (The Oxfordshire and Buckinghamshire Light Infantry), the 60th (The King's Royal Rifle Corps) and the 95th Rifles (The Rifle Brigade). An outstanding collection of uniforms, weapons, silver, paintings and medals set over two floors. The exhibition on the first floor, entitled 'With the Rifles to Waterloo', opened in 2015 to commemorate the 200th anniversary of the Battle of Waterloo. The centrepiece of the exhibition is the 25 square metre model of the battle with light and sound commentary. The museum is situated in Peninsula Square, formerly the barracks and the home of the Rifle Depot.

This is one of the five military museums in Peninsular Barracks. It traces the history of the British Light Infantry. There is a world map showing all the places where they had been in action. I appears that, apart from most of South America, Britain was involved in wars just about everywhere!
There are lots of weapons and uniforms. You can even pick up some of the old rifles and muskets.
There are also several impressive dioramas. The centrepiece for the museum is the superb 25 sq m diorama of the battle of Waterloo. It has thousands of soldiers and horses. If you look closely, there are some amusing vignettes (eg a farmer protecting his cabbages). There is an excellent commentary and light show to go with it. It's worth staying to see it more than once, so you can see the battle from different positions. 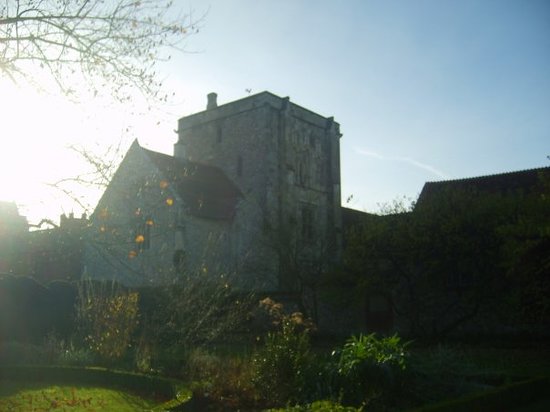 I had envisaged that this tour would merely be a climb to the tower roof to admire the views. In fact, there is so much more to see, involving moving around a planned route just below ‘ceiling’ level. Incredible! It was fascinating to learn how this ancient building had been constructed, including earth ‘ballast’ to keep the whole structure grounded on the flood plain. We saw centuries old wall painting, graffiti.
Steep spiral staircases and ladders have to be scaled on the tour, so visitors need to be reasonably fit and mobile.
To end, we finally admired the views from the rooftop-fabulous! We were lucky enough to have a clear sky to enhance our visit.
Our guide was excellent in ensuring we safely completed the tour and gave us a brilliant insight into this amazing building. A must see on a visit to Winchester. 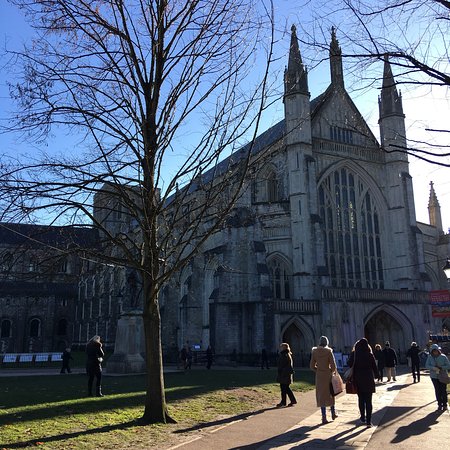 Fifteen centuries of English history lie behind the magnificent Cathedral you see today. It stands at the heart of historic Winchester, once the seat of Anglo-Saxon and Norman royal power, on the site of an early Christian church. Begun in 1079, the Cathedral has been a place of worship ever since. Today the Cathedral welcomes hundreds of thousands of visitors each year and in recent years has become well known for its annual Christmas Market and open-air ice rink, which alone attract over 350,000 visitors. A walk round the Cathedral takes you through centuries of English architecture. Particularly striking is the vast gothic nave, the longest medieval nave in Europe. Great works of art, including paintings, sculptures and carvings can be found throughout the building. Don’t miss the Crypt, this atmospheric part of the Cathedral is home to Antony Gormley’s contemplative statue ‘Sound II’ which, after prolonged periods of rainfall can be seen standing in water. The Winchester Bible, the largest and finest of all surviving 12th-century English bibles, is one of the Cathedral’s greatest treasures. Its exquisitely illuminated capital letters, coloured with gold and lapis lazuli, are as intense today as they would have been 800 years ago. The Cathedral is the resting place of many influential and famous people including Saxon kings, bishops and the much-loved English novelist Jane Austen, who was buried in the Cathedral in 1817. An exhibition telling of Jane’s life in Hampshire can be found beside her grave and a memorial plaque funded by her nephew is on the wall adjacent. A guided tour provided by the Cathedral’s own volunteer guides is by far the best way to explore the building. Available on the hour from 10am – 3pm Monday to Saturday, these hour-long tours really do bring the Cathedral, its characters and history to life. It’s worth taking the time to walk through the Cathedral’s historic Inner Close where you will find beautiful buildings and hidden Gardens and a gateway to a pretty area of the City known as Kingsgate Village. A perfect way to round-off your visit is a visit to The Refectory, serving homemade cakes, a seasonal lunch menu and a good range of drinks. The pretty Terrace and orchard with outdoor Seating enjoy good views of the Cathedral. The Cathedral Shop sells a wide range of gifts, cards, books and music, many items have been commissioned especially for the Cathedral so can’t be found anywhere else. A selection of products are available to purchase online via the Cathedral website.

This is a lovely peaceful Cathedral. Incredibly history, from the bones of former kings to Jane Austen. And, the beautiful stained glass - I was told the original was smashed during the Civil War, and the English collected the pieces and created this beautiful mosaic.

The oldest school in continuous use in the UK.The last scenes of Les Miserable were filmed here and the dining room feels like Hogwarts, but real history is the reason behind visiting this amazing school. The guides are incredibly knowledgeable. Look for the door with the circular hole for delivering scrolls, and look for the Arch of Dreams.
Caution #1. If you're not in a tour group or similar, you cannot book in advance.
Caution #2. There is no toilet facilities for visitors use!
Our tour was about 75 minutes. And well worth every penny. 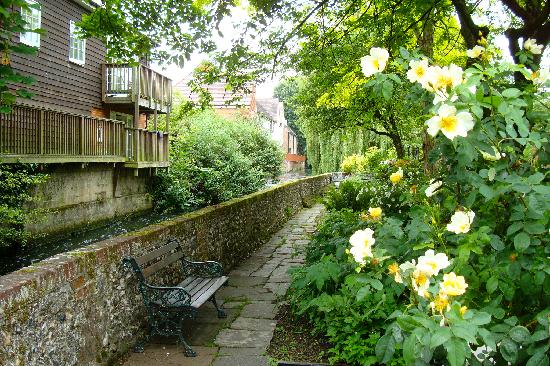 Winchester City Mill is a working watermill dating back to at least Saxon times; now fully restored by the National Trust, the City Mill is probably the oldest working watermill in the UK. Inside visitors can discover more about the mill’s long and fascinating history as well as see the mill in action and learn how we produce traditional stone-ground wholemeal flour using the power of the River Itchen. Our team of volunteer millers provide flour milling demonstrations every Saturday and Sunday as well as Wednesdays during the summer months. The City Mill is also home to a wide variety of wildlife including kingfishers, grey wagtails, wild trout, water voles and even otters which can be viewed from our on-site observation cameras.

Visited the mill as a NT member, really informative staff. Interesting to go underneath and see the workings of the mill, didn’t see the Otter in person. Was unsure how interested our toddler would be but good interactive display (she enjoyed messing around with millstone and shovelling flour). Great little shop selling flour and other bits and bobs. Well worth a visit. AYO GHURKALI Brilliant Museum just opposite the Green Jackets Museum in Penninsula Barracks. Not going to say much about the place, it will spoil it. JUST GO AND VISIT. Absolutely brilliant. An insight to the brilliant soldiers. Definitely worth the visit you won't be disappointed. WELL RECOMMENDED. 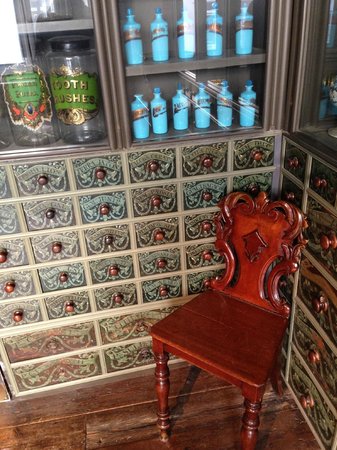 The city museum was a bit of a surprise really. It was small, over 3 floors and impressive. The scale model of Winchester is something else, absolutely incredible. We spent ages comparing where we'd been and what we wanted to do.
The mosaic area was really fascinating. I loved it and the good thing is that it is small because it doesn't take you all day to get around it. An hour would give you enough time, but a little longer would be better.
I'm pretty sure it was free entry which is a bonus these days! 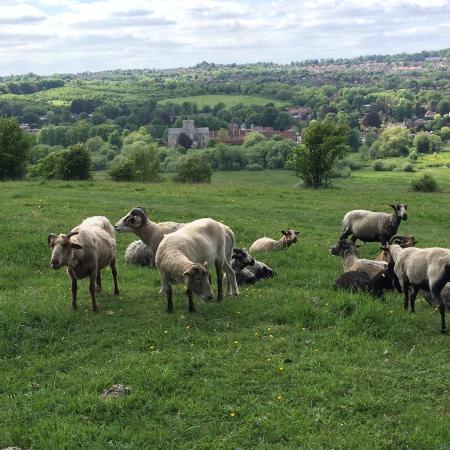 A 20-25 minute hike up the hill, sometimes with steps, brings a stunning view of the city! Having gone just before sunset, it was amazingly beautiful and a view that went to miles! Sadly, we missed the sheep :-( Wear good hiking shoes or sneakers! 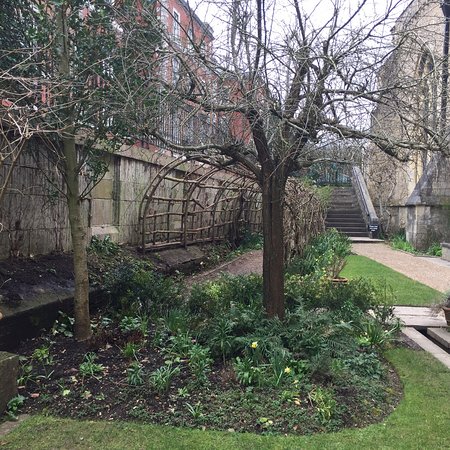 The Great Hall is one of the finest surviving medieval aisled halls of the 13th century and is all that remains of Winchester Castle. The Great Hall is open daily to the public offering a unique historical experience and the chance to see the greatest symbol of medieval mythology: King Arthur's Round Table. Visitors can also see Queen Eleanor's garden, a recreation of an enclosed medieval garden, providing an injection of nature. Our knowledgeable custodians offer guided tours to unlock the historical journey of the Great Hall and Winchester castle at 11:00 and 15:00. Entry charges apply, please visit our website for further details.

Before arriving in Winchester, I had no idea that it was home to the Round Table. Worth the small entrance fee to see this artifact hung in the Great Hall, which in itself is an interesting building, having been part of Winchester castle. The Great Hall achieves being a living building, rather than a museum exhibit, with beautiful gates installed to commemorate the marriage of Prince Charles and Lady Diana Spencer, and a beautiful small garden created in a historical style.

Our 140-acre park is home to an incredible range of exotic and endangered species, in beautiful, landscaped surroundings. Just by visiting Marwell Zoo (owned and operated by conservation charity, Marwell Wildlife) you'll be making a big contribution to our projects to conserve species and habitats, both here in Hampshire and around the world. If you're loopy for lemurs, be sure to look out for Lemur Loop. A walkthrough exhibit opened summer 2017. Coming 2018 - At a cost of £7.8M, our new Tropical House will be the largest exhibit ever built at Marwell. Opening at Easter, guests will be free to share the habitat and enjoy views of new, colourful and charismatic mammals, birds, reptiles, amphibians, fish and insects whilst learning about the flow of energy through life. Keep an eye out for new arrivals throughout the year too! Our £15-19 adult entry fee varies across the year and includes a voluntary donation of around 10%. Please check our website for full ticket prices.

Read the mixed reviews and didn't quite know what to expect, but decided to chance it as it was sunny.
Was lovely. We saw lots of animals. Spent 3 hours wandering around and had a coffee, Sandwich and kids lunch box from the main cafe. (Which was priced reasonably).
Unfortunately the train was out of action.
Staff were all really nice and had a lot of friendly good mornings as we walked round.
weve never visited before but on the day we went a new tropical house was opened and we got to see a sloth....being very sloth like.
Giraffe feeding was an unexpected highlight as we just happened to turn up in time.
Plenty of places to sit if you take a picnic.
Good for a fun morning or afternoon out.