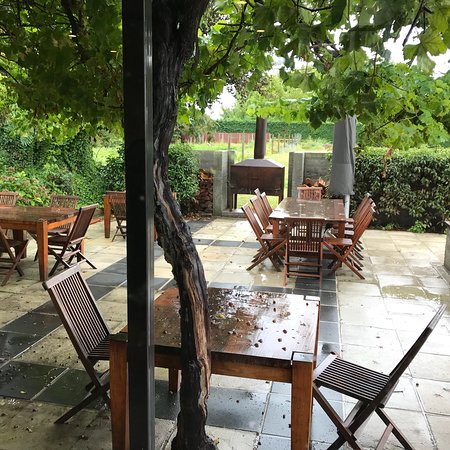 At St George&apos;s, the majority of our ingredients are organic, grown on-site and hand-picked by our award-winning head chef Francky Godinho.The menu is then created to produce elegant and colourful dishes using the best our garden has to offer.Francky delivers clean, precise and intense dishes with a contemporary approach to ingredients and technique.

My wife and i unusually had the same meal this time. Rib eye fillet with a medley of vegetables side. Medium rare. This was one of the best steaks I have ever eaten and a perfect size for a good lunch. Topped with delicious vegetables and in a nice light sauce. The medley of vegetables came with a light coating a bit like dukkah and this was the nicest side of vegetables I have ever eaten. Vegetables are from the restaurant garden. Service was top notch. The only thing that lets st George down is the slightly confused decor but it's nice not awkward. We didn't have desert but the table next to us did and they look divine. I ended with a flat white and it was nice and strong. I will come back for sure and will pass a lot of other restaurants on the way to do so. You expect this wine region to have wonderful winery-restaurants but this one takes it to a whole new level. The building itself is beautiful, and the the tuna dishes and the eye fillet were perfect - as were the desserts. This will now be added to our yearly visit list. 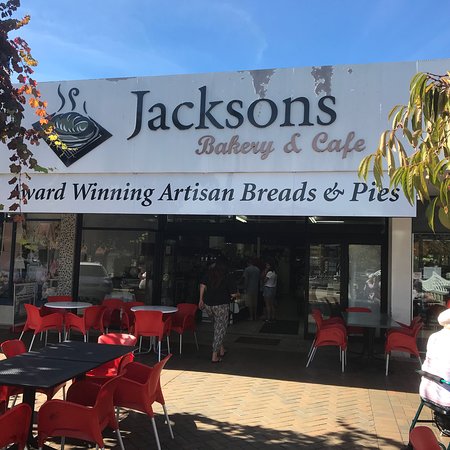 As a visitor to Havelock North there is nothing nicer than to be greeted by friendly staff, the smell of freshly baked food and 'confronted' with a hugely wide wide of yummy food.
The eight year old hovered 3 mini mince pies, giving them an A+++ rating, this bakery is award winning for a reason - loved it! 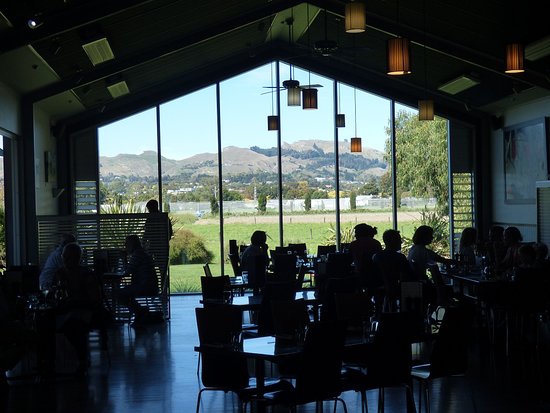 Off The Track - The regions best Havelock North Restaurant & Licensed Café - is the perfect retreat for a casual meal, a drink with friends or a delicious coffee. We offer a wide range of dishes to suit all tastes and budgets – including our ever popular breakfast menu, starters and snacks for smaller appetites and a just for kids menu.

We stopped in here after visiting the beautiful Te Mata peak for some lunch. We sat outside and enjoyed the stunning view, the service was excellent and the food was really good! The menu has excellent choice, I had the vegetable fritters which were amazing. Our group also sampled the bacon and cheese burger and Caesar salad. Great portion sizes and all excellent. Coffees were also wonderful!

Open for lunches 7 days and dinner Wednesday to Saturday, Black Barn Bistro is the perfect place to spend an hour or two absorbing the atmosphere of Wine Country. It is in the heart of the vineyard surrounded by vines and a table on the large generous veranda lets you look right out across the region. In warmer weather a courtyard covered by a canopy of grapes is also a perfect place to enjoy lunch and a glass of wine. The restaurant menu is light, fresh and delicious. There is an emphasis on freshly grown Hawkes Bay produce, the selection changes with the seasons. The bistro is available for private functions, evening and during the day, it is also the perfect venue for a very limited number of weddings, for bookings or enquiries please give us a call.

We visited Black Barn twice during our 5 day stay in Hawkes Bay - first for dinner. The food was outstanding, fresh and delicious combinations beautifully presented. We enjoyed 3 courses each and the entree and dessert were the best of our trip, with the main coming a close second. The second visit was for a wine tasting, the lady who served us was knowledgeable, bubbly and personable, and set the bar high for the rest of our cycle tour! Beautiful setting, would come back again to enjoy a delicious lunch or dinner under the vines. Pipi is all about you the customer we don’t mind if you come in your muddy gumboots or your Gucci stilettos, or if you drink Bollinger with your pizza or house red. We are very lucky in Hawkes Bay to be surrounded by wonderful produce and wine and our menu very much reflects this, where possible everything is local and organic. We don’t take ourselves too seriously but we do take what we do very seriously. Using the best freshest ingredients and cooking them to best bring out their natural flavours. Pipi was born out of my love of my children and food and now 15 years later this has not changed at all and is still at the heart of everything we do.

Had the pleasure of eating here several times. We loved everything. Pizzas are exceptional- thin crispy base with a heap of choices for toppings. fresh fig, bacon and blue cheese- amazing!! Gnocchi - beautifully soft and great texture. Perfectly cooked steak - with the best mash I’ve had in a long time. And the desserts- oh my!! Tiramisu to die for!! And the sticky date pudding! Make sure you leave room atleast to share something.
What makes this place unique is the vibe and style. Very informal and relaxed. If you are in a hurry consider placing your order before you arrive?? Otherwise have enough time to fully enjoy this cool dining experience!
Staff lovely and friendly too.

Came with a group of work colleagues on a Wednesday night. Friendly service.
Everyone enjoyed their meal. I found the mushroom entre a little pricey for a few deep fried mushrooms.
Ginger vegetables were very nice though you pay additional for rice.
Owner engages with regulars very well. Obviously a favourite for many in the "village". Nestled in the heart of Havelock North, Deliciosa is the perfect place to come together. We offer a casual environment for drinks, tapas, a la carte dining plus have unique spaces to gather your favourite people and celebrate that special occasion. Year after year we win the regions Outstanding Beverage List with a carefully curated selection of local and international wines, including Coravin, an ever changing craft beer and cider list, and an evolving spirits selection. Our food has bags of flavour, generosity at its heart designed to share with a group of friends. Traditionally with a Mediterranean feel, Deliciosa has evolved to encompass a wide range of cuisines to cater to all tastes. We look forward to seeing you.

Visited here for a work function so got to try a variety of different dishes. We settled on the $45/person menu giving us 10 different dishes. The food was outstanding & the waitress really looked after us. Drinks are quite pricey here but after all, it IS an upmarket restaurant & quality is definitely guaranteed. 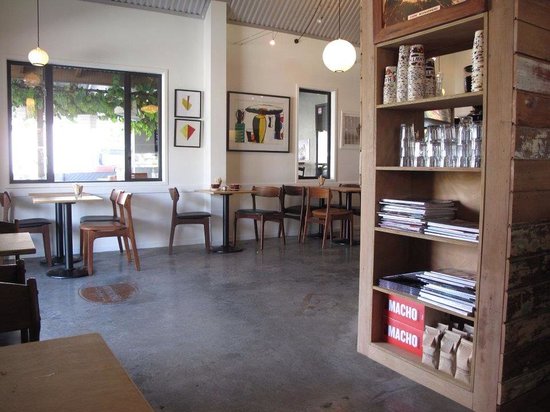 Stopped for a coffee while wandering around the village. Quite busy but found an outside table. One of our party is a coffee aficionado and criticises all coffees - hard to please. However, he felt it was okay and the rest of us were quite happy with our choices. The place is small and they roast on the premises. We've seen that process and they certainly know what they're doing. The food is slightly more expensive than some other places but usually very good. Staff are friendly although can be a bit offhand when it's really busy (understandably). Overall worth a visit 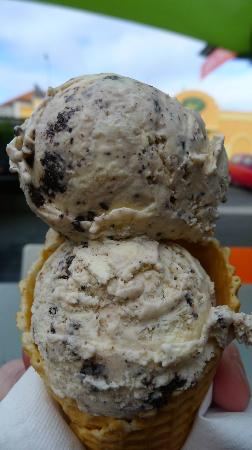 We stopped at Rush Munro&apos;s for ice cream during a recent visit to Hawke&apos;s Bay area, great stop should be reviewed for TA visitors.

This was our first stop on my first visit to Napier, the day after we got engaged, 55 years ago. We return every so often to enjoy the same delicious hokey pokey ice cream atop the freshest, crunchiest cone. Yummmm! There is a good dose of hokey pokey in the icecream too. The premises seem the same, the icecream certainly is. Just the best in New Zealand if not the world!