Fès-Boulemane (Arabic: فاس بولمان‎ (Ǧihâtu Fās - Būlmān)) was formerly one of the sixteen regions of Morocco from 1997 to 2015. It was situated in northern Morocco. It covered an area of 19,795 km² and had a population of 1,808,295 (2014 census). The capital was Fès. In 2015, it expanded Taounate and Taza Provinces (formerly from the Taza-Al Hoceima-Taounate Region); and Meknès Prefecture and El Hajeb and Ifrane Provinces (formerly from the Meknès-Tafilalet Region) to form the Region of Fès-Meknès.
Things to do in Fes-Boulemane Region 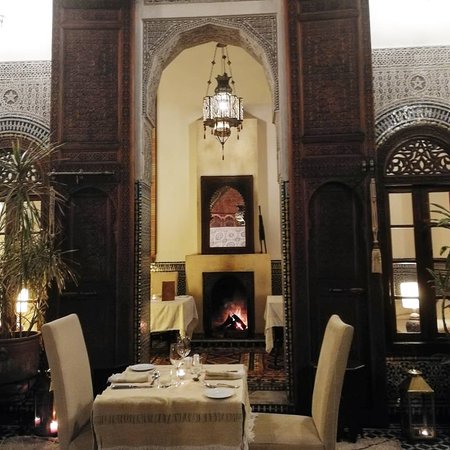 An intimate dining experience in a beautiful setting, dinner at Dar Roumana&apos;s restaurant is a must-do for any visitor to Fes. Our talented French chef serves Mediterranean food with a Moroccan twist, and can be described as French/Moroccan &apos;fusion&apos;. Changing daily, the dishes on the menu reflect the produce that&apos;s in season and bought fresh from the markets every day. Start with a drink on our roof Terrace with spectacular views of the ancient medina of Fes, then dine in our courtyard restaurant. Decorated with colourful zellij tiling, carved cedar wood, a beautiful hand-painted bartal and intricate plaster, the restaurant is breathtakingly beautiful. In the winter, reserve a table for two next to our open fire, and in the summer be cooled by the splashing sound of the central Fountain. Adding to the romantic setting is the attentive but discreet service. Allow us to transport you to a world of fine cuisine for the evening. We look forward to welcoming you to Dar Roumana. Reservations essential.

Dar Roumana is a gem of a restaurant. Beautiful and calm, with French/Moroccan food - beautifully presented, cooked to perfection, excellent vegetarian options (a welcome change from vegetable tagine), great choice of wine and splendid desserts. A lovely evening in the midst of the Fez medina. Thank you! 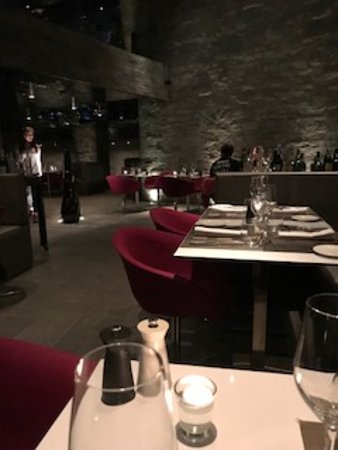 The space is absolutely beautiful. I selected the restaurant because it was listed as vegetarian friendly, but selections for vegetarians were not plentiful. My vegetarian dinner, comprised of two appetizers, was the least satisfying of our group's. However, the fish dish was outstanding as was the snail appetizer. Our biggest problem was all the smoke from the diners around us. Wish they offered a non-smoking section. 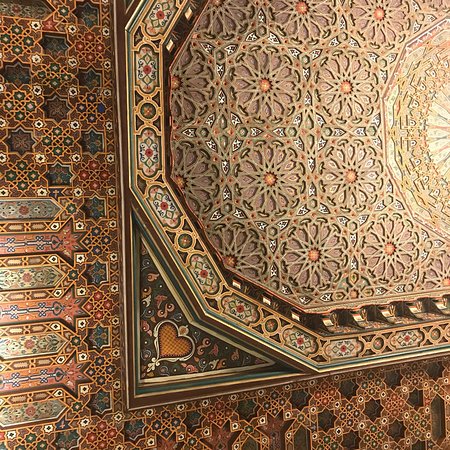 Our kitchen is based on fresh 100% natural products , come to test the real morocan kitche . You are welcom to " Dar Hatim "

Run, don't walk, to this restaurant to taste an exquisite, mouth watering chicken pastilla. By indulging in the several delicious salads beforehand, I failed to leave enough room to finish my order. Don't make my mistake. You can always eat those salads after the pastilla.
By the way, one of the owners will pick you up at your Ryad, for it's hard to find in the dark. Lovely family-excellent food! If I return to Fez, this restaurant will be my first stop! 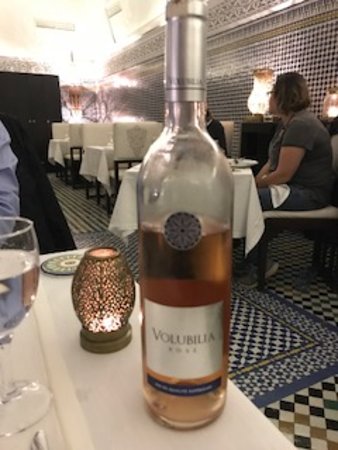 At Eden you are introduced to the diversity of Moroccan cuisine through types of dishes found in Moroccan homes, revitalised with a twist of creativity and sophistication and brought to your table by our acclaimed chefs. In addition to our selection of exquisite Moroccan Signature dishes on the à la carte menu, Eden’s new concept ‘Market Moroccan’ is a weekly changing three-course bistro menu that provides fresh innovative healthy dishes reflecting the abundance of seasonal produce that is on our doorstep. Each week, our chefs create a three course menu using fresh, seasonal produce from the market just around the corner from our Palais, farmed just outside of Fez and marry traditional recipes with contemporary methods and presentation. Dine in our hidden paradise under the majestic citrus trees for an unforgettable culinary adventure. We are open for Breakfast, Lunch and Dinner everyday to residents and non-residents alike. Reservations are highly recommended!

What a disdasppointment. We had been recommended this place. First experience was to be met at the main square by a staff member.....good
Then downhill from there. Restaurant was at least half empty. staff did not know what they were doing and the food came out hot on the outside and cold on the inside. And it is also not cheap 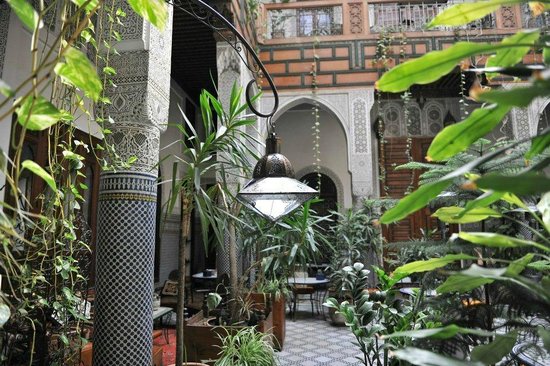 Dinner guest table - a different menu every night Under Reservation Only Depending on the market of the day, you will taste the specialties freshly prepared for you by Fatima and Fatin. The diversity of the recipes and their refinement puts the Arab-Andalusian cuisine among the best cuisine in the world. The combination of different spices will introduce you to new flavors that will touch your senses. The products used are exclusively fresh, seasonal ingredients, and bought from the market every day. The bread is homemade and baked in the public oven . The menu for dinner is decided in the morning. Starters includes a variety of Moroccan salads like beans" Bissara" or " tchachouka" , maybe a duo of grilled peppers, tomato with honey or soup ... The main dish is copious, you will taste either Fez couscous made with barley semolina, or the famous chicken pastilla or one of our tagines (fish tagine, camel tagine with dates, tagine of lamb with pears ...). The dessert, An orange or lemon pie, a filo pastry with milk and fruit or a chocolate fondant ... For wine lovers, we offer a selection of Moroccan wines from Meknes, Agadir or Casablanca. The menu includes: 3 different starters + main course + dessert The price is 20 euros per person without drinks. Dinner is served between 20h and 22h.

We were not a quiet group (7 females) but that didn't bother them. We were treated with kindness & respect,nothing was too much trouble & they helped us organise trips outside the Medina.
The whole Riad is very pretty with hanging plants from the balconies,this where you eat breakfast & dinner.Rooms are clean & some are enormous with a couple of small ones,one of my rooms had an enormous round copper bath !
Great place to stay & the staff are wonderful too ! 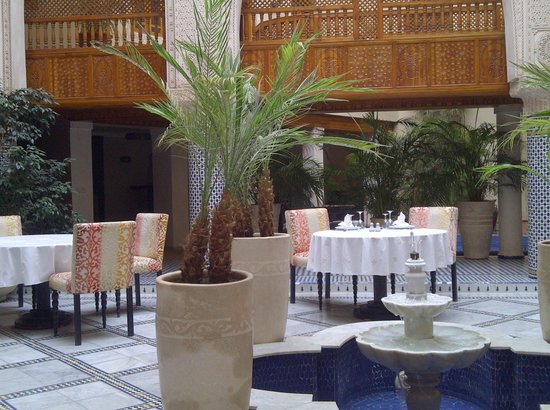 We ate here on our first night in Morocco and it was good traditional Moroccan food. We had the beef tagine and the chicken with couscous and it was very good! The service was wonderful and we even tried some Moroccan beer. The ambiance was beautiful as well. Great dinner! 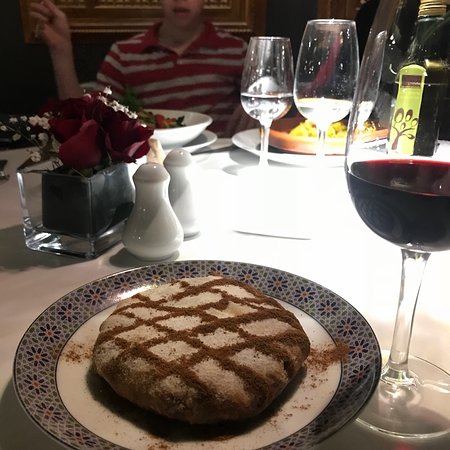 One of the best tajine we had in Morocco so far. Loved the chicken tajine with pumpkin marmalade, veal shank, lamb gilt, pigeon pastilla with desserts. Try the chocolate cake. It’s pricey ... water bottle of 1L costs 60 dirham. 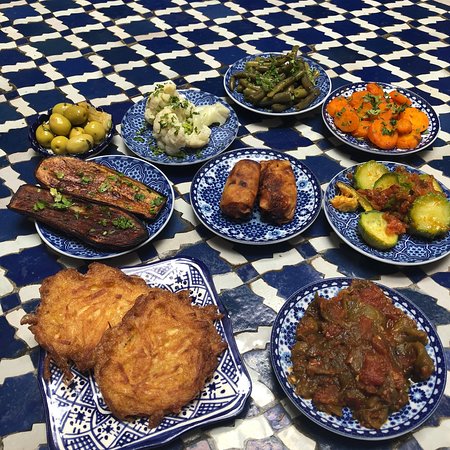 When arriving through the daedal, narrow streets of the medina, a door opens on the magic world of this enchanted city. Salim is the wizard which makes spells and transforms your dinner in a wonderful cultural and culinary experience. The location is the best riad you can find in Fez. Everything was delicious and dishes are huge! The fresh fruit at the end is simply spectacular. Highly recommended!

My wife and I ate here twice in one day, first lunch and then dinner. This had been our first trip to Africa and we had chosen Fes. The medina guide had suggested this restaurant as being suitable for both Moroccan and International cuisine and so we went for lunch, which we had outside on the terrasse, and what a fabulous meal it was. We were presented initially with olives, cheese biscuits and home made potato crisps for nibbles. We then shared a fantastic dish of mixed kebabs, succulent pieces of chunked and minced lamb flavoured with herbs and spices. For mains I had ordered the recommended veal tagine which was to die for, the veal was melt-in-the mouth tender and very tasty and cooked with the most wonderful aubergines, done three ways. I found a piece of shin bone in the bottom of the tagine, put there to add flavour to the dish, which it certainly did. My wife had tagine of cous-cous chicken, which wasn't on the menu but which was no problem for them to make. Again, a wonderful dish, tasty and succulent chicken pieces with fluffy yellow cous-cous.
Staff were friendly and attentive, view from the terrasse over Fes medina is stunning and we were so impressed with this lunch time sojourn that we booked for dinner. 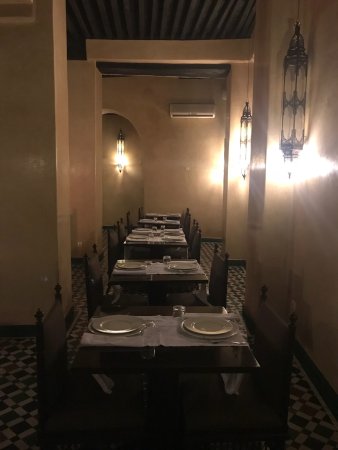 In Fez, Marrakech Riads have restored one of the finest houses of the medina to its former splendour: Dar Bensouda (17th century) Situated within a stone’s throw of the colourful market of R&apos;Cif where you can see the people of Fez in search of the best produce for their tables, the restaurant of this elegant residence is the ideal place to discover the inimitable art of Moroccan hospitality. The menu gives preference to the traditional recipes of Fez, displaying a subtle blend of sweet and sour; the inheritance of Berber, Jewish and Arab-Andalucian influences. Moroccan cuisine, of which Fez is the crucible, is not afraid of mixing ingredients. It&apos;s roots reach far back in time so prepare yourself for a long journey through the history and territories of Moroccan cuisine.

We were staying here for 3 nights and the food was so good that we had supper here twice. The portions are large and delicious. The traditional b'stillas is excellent and the cold salads are large enough for 3 to share. Because of its location...MoreDear guest, Greetings from Dar Bensouda ! We are delighted to receive your review. Thank you very much for your appreciation, it was with great pleasure having you here at Dar Bensouda. we hope to see you again soon. Best regards,