Condeixa-a-Nova (Portuguese pronunciation: [kõˈdɐjʃa ˈnɔvɐ]), also known as Condeixa, is a town and a municipality in the district of Coimbra, Portugal. The population in 2011 was 17,078, in an area of 138.67 km². It is located 15 km south of Coimbra, and is part of the Região de Coimbra. The town is known for the ancient Roman settlement of Conímbriga which is located nearby, and includes a museum and the well-preserved ruins.
Restaurants in Condeixa-a-Nova 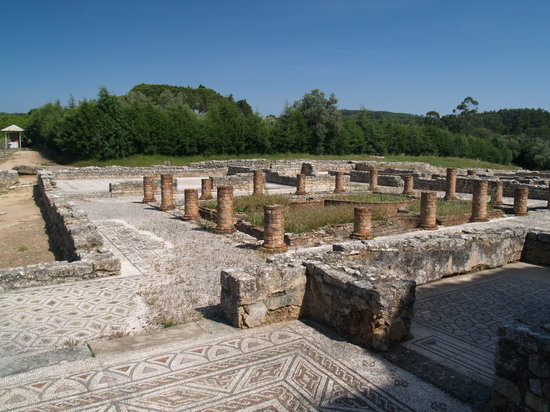 We stopped to see these extensive Roman ruins while in the area, and I would suggest allowing at least 2 hours to really explore the area and museum......the latter contains objects that were found during the excavation as well as historical information regarding the ruins themselves. As for the site, the mosaic floors are in excellent condition and a beautiful example of the craftsmanship involved in their designs. Be sure not to miss the water Gardens being preserved under cover, and as others have mentioned, take water and wear good walking shoes as well as a hat. I neglected to ask if the dig was still active, but it appeared that much work was still needed to complete the project...... This is an absolute must see if you are anywhere near the university. Such a shame that cameras cannot be used (probably due to the numbties who do not know how turn off the flashing their camera/phone) 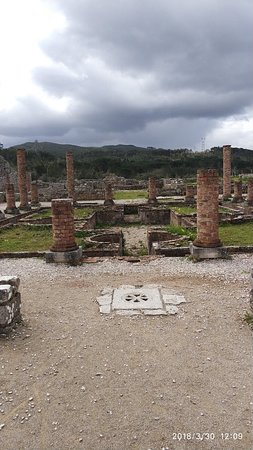 Reviewed By RICK B - BILLINGS

The museum, ticket office and restaurant are all in very nice modern facilities. The cost for seniors is only 2.25 Euros, for both the site and museum. There are good explanations of the homes, multiply baths and general history. You will need comfortable walking shoes as there is approx. a 1/2-1 mile walk to see all the different areas. We saved the Fountain house to the last, it is the one under a cover. We enjoyed our time there and exploring and imagining what it all looked like 2000 years ago. The museum is small, but done very well, with good explanations of most of the artifacts. 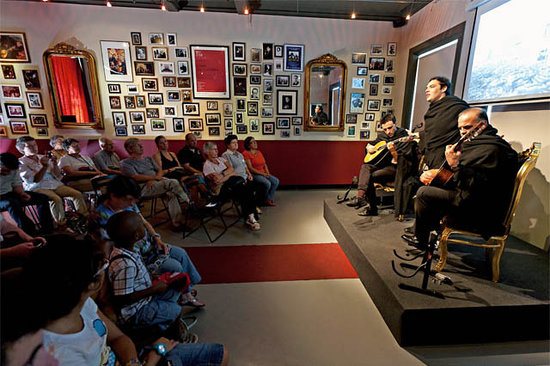 Fado ao Centro is a Cultural Association of Fado from Coimbra, opened from Monday to Sunday (10am to 7pm). Located in the historical center of Coimbra (Rua Quebra Costas),the entrance to the photo exhibition about Coimbras University tradition & informations are for free. Also have Fado shows everyday, with a recreation of a Live Serenade, that everyone can experience for a small amount of money! A magical space with a unique atmosphere were you can find the most genuine and traditional Fado from Coimbra everyday from 10:00 a.m. to 7:00 p.m. Only the best musicians of the city play in Fado ao Centro and they are selected according to the highest standards of this 160 year old tradition. Even if you can't witness the concert, don't miss the oportunity to visit our space and get to know a little bit more about Fado from Coimbra. There are always musicians playing and rehearsing so you can change experiences and learn more about the Portuguese Guitar and this unique musical tradition. Bewtween 4:00 p.m. and 5:30 p.m. we have the "Afternoon Rehearsals" with our regular musicians. You can always pass by, watch them play and anyone that want's to bring their own instrument is also welcome to join! At 6:00 p.m. we start our daily 50 minute long concert of Fado from Coimbra. If you are interested in attending our concert, we strongly advise you to make a reservation in order to ensure your seat. We don't serve any kind of food, so we are totally committed to the concert itself, enabling a genuine atmosphere and unique cultural and musical experience in Coimbra! Following the work that has been held by this Cultural Association, you'll find different exclusive editions of books, CDs and DVDs related to Fado from Coimbra. Fado ao Centro(R) is, undoubtedly, a place to visit in Coimbra!

Reviewed By John I - Taipei, Taiwan

Our family of 4 (with two teenagers) caught the show on Christmas Eve. Am a huge fan of Brazilian music and wanted to sample a different kind of Portuguese language music. While I don't see myself becoming a Fado aficionado, this was a great show. The musicians were very tight (the Portuguese guitar is super sexy) and the show was a nice mix of music and history. That they described everything both in Portuguese and English was key for us. At an hour, was the right length for our finicky teenagers.

Very recent but largely worth the visit, this museum is an excellent new attraction to a city, Condeixa, that is widely renewed itself in the last years. The museum building is well built and quite nice to visit inside and outside. But the main interest comes from the nice concept of the museum, mostly based on interactive experiences to learn the lives and history of the roman civilisation. It is focused on the roman occupation of the area ("Terras de Sicó", defined as the regions around Conimbriga, Tomar and Leiria) but the information provided goes well beyond this, giving us about a more general overview of the roman world. The interactiveness of the museum is the most interesting part of it, allowing the visitor to experience details that otherwise would go unnoticed. Well worth the visit, even if you are staying in relatively faraway cities as Coimbra or Tomar. And very nice for kids, although they should have more than eight or nine to really appreciate the wealth of information the museum has to offer. Final bonus: the price, very small for such a quality museum. 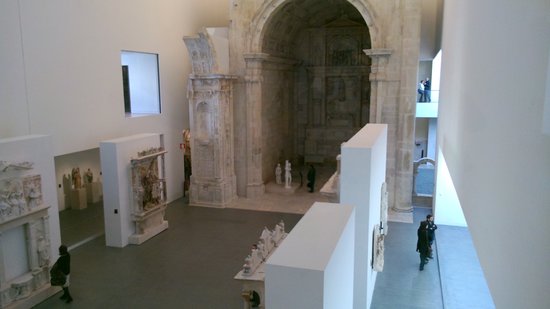 The museum Machado de Castro is enlisted on the Unesco World Heritage list and covers about 20 centuries. We had only a few hours to discover it but its extensive reach makes it impossible to properly digest everything.
You start underground in the mind blowing Roman cryptoporticus. These two layer galleries are remarkably intact/restored. The cryptoporticus supported the above ground Roman buildings (Forum). Coming above ground you can visit the archaeological collection which comprises elements excavated from the cryptoporticus but also from other parts of the country.
After that we jump a few centuries and can admire collections of sculptures, paintings, textiles, precious metals and ceramics from medieval times onwards to basically the 18th century.
Also to be seen are the remains of a medieval cloister and church.
The museum offers a buffet type of restaurant at very democratic prices. For the less valid people elevators are foreseen to help them going through the many levels of the building.
I would recommend you take a full day to visit and take a lunch at the museum. 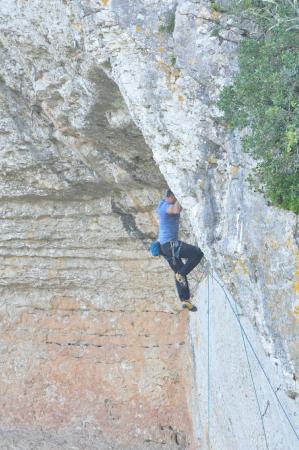 In the region (about 10 km of Coimbra) we have Condeixa-a-Nova, Pombal and Alvaiázere, where we can find a formation of “Solid Limestone”.
We have to drive to the small rural village called “Casmilo” from where we will follow the signposted trail to the “Buracas do Casmilo”.
Those are a natural formation of geological wholes, this is not a massive tourist place but worth wile to spend a visit.
It is a very attractive place for people who like to have a nice trail walk in the complete nature, and beside also very interesting for people like outdoor sports like rock climbing etc.
You can take your picnic and enjoy a nice sunny day.
This visit can be included in a tour who will lead you from Coimbra, over to the Penela Castle and the Ruins of Conimbriga, all this together will give you an unforgettable vacation.
To get to the location from Coimbra:
Leave Coimbra by the “IC2” in the direction of Condeixa-a-Nova, than you will see the sign for “Arrifana” (straight road uphill) than follow the sign for Casmilo and the “Wooden Signs” for “Buracas do Casmilo”.
Once arrived into Casmilo, you have to turn right and follow the dirt road, with a normal car drive very slow, and in the meantime enjoy the magnificent environment. 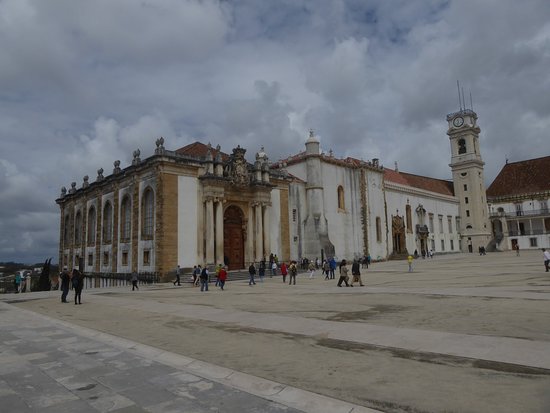 I'm not sure why this has been separated from the Science Museum and the remaining university sites, as it is part of the combined ticket for which you are charged admission; there is no way in which to visit the library in isolation, though you can choose a cheaper ticket that excludes the library. When you purchase this combined ticket, you are allotted a slot to visit the library in a small group, and also given another time slot to visit the Science Museum.
Immediately after purchasing my ticket, I wished I hadn't. I wasn't fond of this site being a tourist attraction, as it's right in the middle of a functioning university, so you have tourists in big groups wandering about the place gawping at students, who clearly don't appreciate the intrusion. Who can blame them?
The library tour itself has three stages or maybe four, as the first part was standing outside in the rain with a group of people waiting to be let in by a surly member of staff. All the staff are surly, and I can't say I blame them either. The first stage involves an uninteresting perusal of the academic prison, less interesting than it sounds, as it wasn't full up with sweaty palmed professors, but empty cells, of which I've seen not dissimilar on Airbnb. Still, everyone got their photos.
Up a flight of stairs for stage 2, which is an interesting display of works by the great symbolist poet Camilo Pessanha. This appeared to displease many of the group I was with, as they didn't come here to inspect actual books and read about writers in a library of all places. Nevertheless, there was still the essential selfies and photos being taken and impatience shown towards those daring to show interest in the displays.
With much of the group getting impatient to get to the main event, a second surly guide informed us individually that there we had 10 minutes in the library, but there were to be no pictures taken. She could've stopped there and it would've made my day without even seeing the library, but my joy was not shared with my snap happy cohort who were much distressed by this invasion of touristic civil liberties.
The library itself is indeed special decoratively, but rather small, and, if you've seen the Bodeleian, a little underwhelming in terms of the volume of books and grandeur (presumably as it's no longer a working library and merely a tourist trap). Pleasant enough, and entertaining to watch the frustration of the photo sanctions, which of course were eventually surreptitiously broken.
The rest of the ticket includes access to the chapel, where you can stand behind tourists taking photos and chatting loudly, and the several other rooms in the main building, where you can repeat the exercise. I was baffled by the conflicting directions regarding the Science Museum and gave it a pass.
Overall, as previously mentioned, I'm not fond of working/study environments being tourist sites, and felt uncomfortable throughout, but presumably, just as Oxbridge swells its abundant coffers with tourist cash, Coimbra does much the same regardless of the feelings of students and staff. As you may note from the graffiti dotted about the city, it's not gone unnoticed, and is not welcomed by some, and given some of the pushy shovy must get a photo at all costs behaviour I saw, I felt ashamed to be complicit. 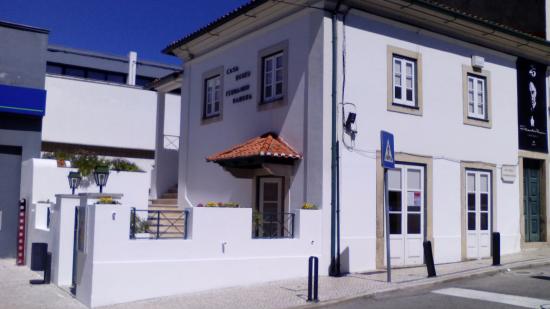 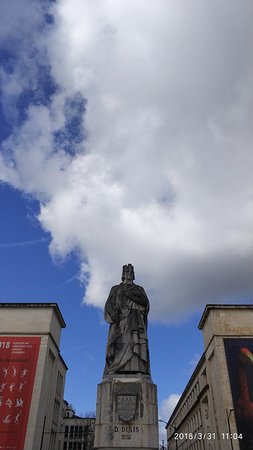 Coimbra would be place with no reason to visit, if there is no university. University has quite some history, very nice library and interesting museum of science. What bit irritates me is in how bad shape are areas right after the corner of official visitors route (meaning areas for standard students)...one example - there are 2 toilets 10 meters from each other...one for general public - renovated, one with sign “students only” really bad one... I would expect that University should mainly serve students and not be Potemkin’s village for tourists...